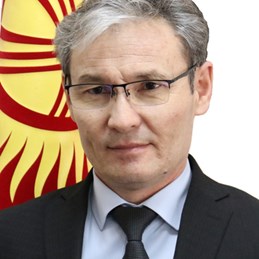 Dr Nurlan Omurov is the Deputy Minister of Education, Kyrgyz Republic. He completed his PhD from the University of Santiago de Compostela, Spain in 2012 and was awarded a graduate degree from the National Academy of Sciences of the Kyrgyz Republic, Institute of Mathematics in 1996.

Prior to his current role, he served as rector of the Kyrgyz-German Institute of Applied Informatics. From February 2016 to April 2019, he served as National Coordinator of the project “KyrMedu: Development of Higher Education in the Field of Biomedical Engineering and Management in Healthcare in Kyrgyzstan” at West Saxon University of Applied Sciences (Germany). Dr Omurov also served as Dean of the faculty of New Information Technologies of Naryn State University for 11 years (1997-2008).