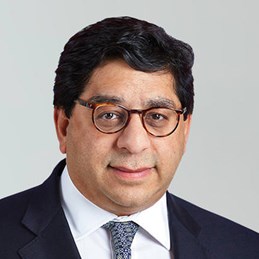 Mr Naguib Kheraj is a banker by background. He began his career at Salomon Brothers in 1986 and went on to hold a number of senior positions at leading international financial institutions. Over the course of 12 years at Barclays, Mr Kheraj served as Group Finance Director and Vice-Chairman and in various business leadership positions. He was Chief Executive Officer of JP Morgan Cazenove, a London-based investment banking business.

Mr Kheraj is currently the Chairman of Rothesay Life, a specialist pensions insurer. He is also Deputy Chairman of Standard Chartered, an international banking group and a member of the Finance Committee of the University of Cambridge.

A former Non-Executive Director of National Health Service England, Mr Kheraj has served as a Senior Advisor to Her Majesty's Revenue and Customs Service and to the Financial Services Authority in the UK. He has also served as a member of the Board of the UK-US Fulbright Commission, the Prince's Trust Development Board, the Investment Committee of the Wellcome Trust, and the Finance Committee of Oxford University Press.

He was educated at Dulwich College, London, and Cambridge University where he graduated with a degree in Economics.