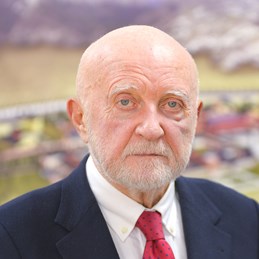 Dr Bohdan Krawchenko is an Advisor to the Rector of the University of Central Asia, Senior Research Fellow at the Graduate School of Development.

In 1991, Dr Krawchenko moved to Ukraine to become Director of Policy Studies at the Council of Advisors to the Parliament of Ukraine, and, in 1992, became founder and director of the Institute of Public Administration and Local Government, Cabinet of Ministers.

In 1995, the Institute was re-organised into the Academy of Public Administration, Office of the President of Ukraine and he was appointed vice-rector for academic development and Director of the Centre for the Study of Administration Reform.

Dr Krawchenko participated in numerous Ukrainian government committees, task forces, and working groups. These include the President’s Council on Social and Economic Affairs, the Policy Unit of the Cabinet of Ministers, the Working Group on the Establishment of the Civil Service, the Working Group on Monetary Reform, and the Commission on Administrative Reform.

He has also served as a consultant to the World Bank and OECD. He was visiting associate professor at Harvard University, Department of Government, and visiting professor at the College of Europe in Natolin, Poland.

Dr Krawchenko was editor of “Occasional Papers in Public Administration and Public Policy” published by the Network of Institutes and Schools of Public Administration in Central and Eastern Europe, and a member of international editorial boards of several journals, amongst which was Public Management and Journal of Comparative Policy Analysis.

He joined the University of Central Asia in October 2004, where he served as the Dean of the Graduate School of Development until August 2022. He also served as UCA’s Director-General from 2007 to 2014.