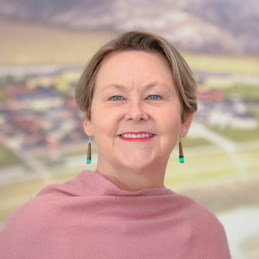 Lucy Palmer is Senior Lecturer of Communications and Media based at the Naryn campus. She is an award-winning journalist, memoir writer, editor and author of the acclaimed memoir, ”A Bird on My Shoulder,” published by Allen and Unwin. Palmer holds a Master's degree in Creative Writing from the University of Wollongong, Australia and a BA in Film, Media, and Communications from the Polytechnic of Central London, UK.  Palmer’s work has been published around the world including The Observer (UK), the Sydney Morning Herald, the BBC World Service, and Australian Radio National. She was awarded a Gold Medal at the New York Arts Festival for her radio documentary, Birdsville to Alice. She has been mentoring students and teaching journalism since 1994 and has taught at the University of Papua New Guinea (PNG), the University of Wollongong, and the Divine Word University in PNG. She was invited to present her PNG students' creative work at the Oxford Conference in 2006 as part of their focus on teaching English and English Literature.   A former foreign correspondent, Palmer has also ghostwritten and edited non-fiction since 2010. An experienced researcher and interviewer, she was the ghostwriter of “Playing the Game: Life and Politics in Papua New Guinea” by Sir Julius Chan, published by the University of Queensland in 2016.