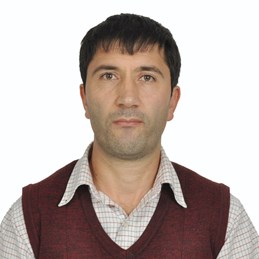 Obidkhon works in AKHP/UCA’s HIE unit. He currently coordinates teaching programmes, activities and curriculum development, and supervises student mini-research studies. He has also taught eight AKHP courses during various semesters. He has a multidisciplinary educational background. His latest degree was an MA in Economics from the Institute of Entrepreneurship and Service in Tajikistan. Prior to this, he studied sociology at the Department of Sociology at Oxford University (2001-2003). Before that, he earned a postgraduate certificate from the Institute of Ismaili Studies as part of its Graduate Programme in Islamic Studies and Humanities (2000-2001).

He obtained his BA from the Department of Foreign Languages as a linguist (1995-2000).

Obidkhon joined AKHP in 2006 as an intern for one year, and has been teaching AKHP courses ever since. Since 2011, he has also been a programme coordinator.

In 2011, he and two other authors developed and published a teaching manual for AKHP’s ‘Tradition and Change’ course.