The University of Central Asia’s (UCA) mission is to help the people of Central Asia preserve and draw upon their rich cultural traditions and heritages as assets for the future.

In 2012, the discovery of a Turkic kurgan or burial site with skeletons of a human and horse was recovered on UCA's Naryn campus. The territory has long been of interest to archaeologists. In 1953, archaeologist Ahmad Kibirov discovered a large cemetery on the Aigyrzhal site, where many burial mounds had been previously destroyed. The borders of the archaeology sites in Naryn are yet undefined as the cemetery surface structures were leveled during the Soviet times. During a seismic study, older remains and petroglyphic drawings were also found among other artefacts, which were carefully relocated under the supervision of community leaders.

Since this archaeological research began in 2012, UCA has facilitated and supported the efforts of Kyrgyz archaeologists as well as experts from the Kokushikan University, National Research Institute for Cultural Properties, Waseda University in Japan, Indiana University in the United States, and the American University of Central Asia (AUCA).

From 2013-2016, a Japanese team determined the age of more than 30 objects by radiocarbon dating, recorded topographic maps, conducted fieldwork with national archaeologists, engaged local students in archaeology and excavation, and published joint papers. These discoveries revealed the complex structure of the sites. In addition to discovering burial mounds from the Bronze Age, the Saka and Turkic periods, traces from a large Mesolithic settlement were found.

“About 13,000 years ago, a group of hunters came to the place we call Aigyrzhal-2. This is very early, one of the earliest dates ever found for these people, and it sets Kyrgyzstan apart as a place where a Mesolithic lifestyle may be the oldest in all of Central Asia. We know this because of the form of the tools, and from dates that were recovered by analysis of charcoal,..In addition, one of the most significant findings on the sites are the patterns of architecture, which date back to 4,000 to 5,000 years ago, in the form of wall and rounded mud structures.”

Dr Aida Abdykanova, Associate Professor of the Department of Anthropology of AUCA, during a public lecture organised by the University of Central Asia’s Cultural Heritage and Humanities Unit (CHHU) in 2018.

Based on archaeological research over recent years on the sites Aigyrzhal-2 and 3 on the University of Central Asia’s Naryn campus, it is revealed that the Naryn Valley has a long history of human occupation.

In 2019, the UCA’s Cultural Heritage and Humanities Unit (CHHU) published a research paper on the ancient layers of archaeological sites on its Naryn campus. The publication was developed in the framework of the ‘Naryn Archaeological Project’ (NAP), which has been implemented since 2017 by CHHU, as part of UCA’s Graduate School of Development. It aims to comprehensively research and preserve the ancient archaeological remains and artefacts at UCA’s campus site. Many vessels from the Saka period found whilst excavating burial mounds. It was a ritual to place vessels with food next to deceased. (Saka Era 850 – 350 BCE).

The ‘Aigyrzhal-1’ and ‘Aigyrzhal-3’ petroglyph complexes on the Naryn campus are two of five complexes that are primarily studied today. Excavation results have discovered that the ‘Aigyrzhal-2’ site is key to evaluating the spread of ancient local populations, as well as the linkages between communities, and agricultural and livestock farms in the Bronze era in Central Asia. 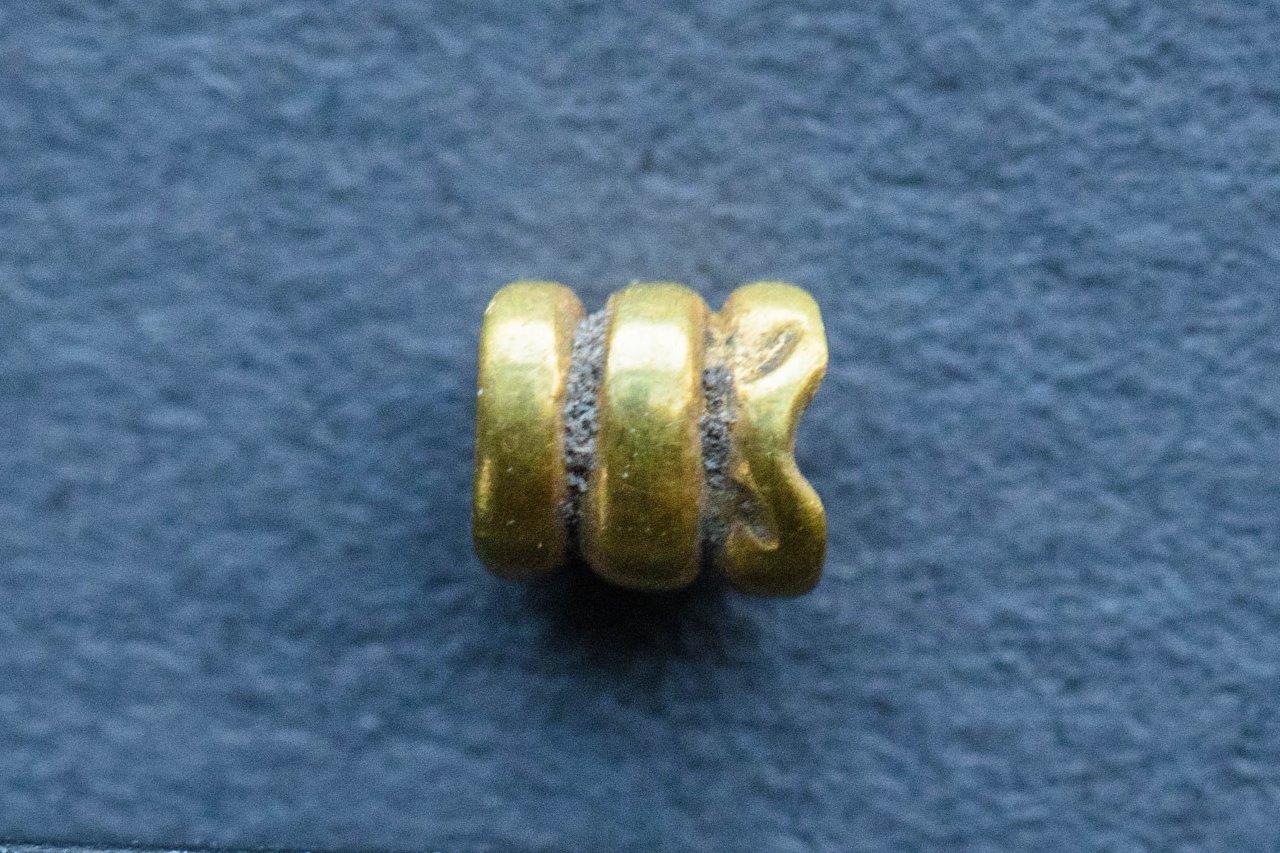 Golden bead from the Hunnic Era excavated from the UCA Naryn campus. 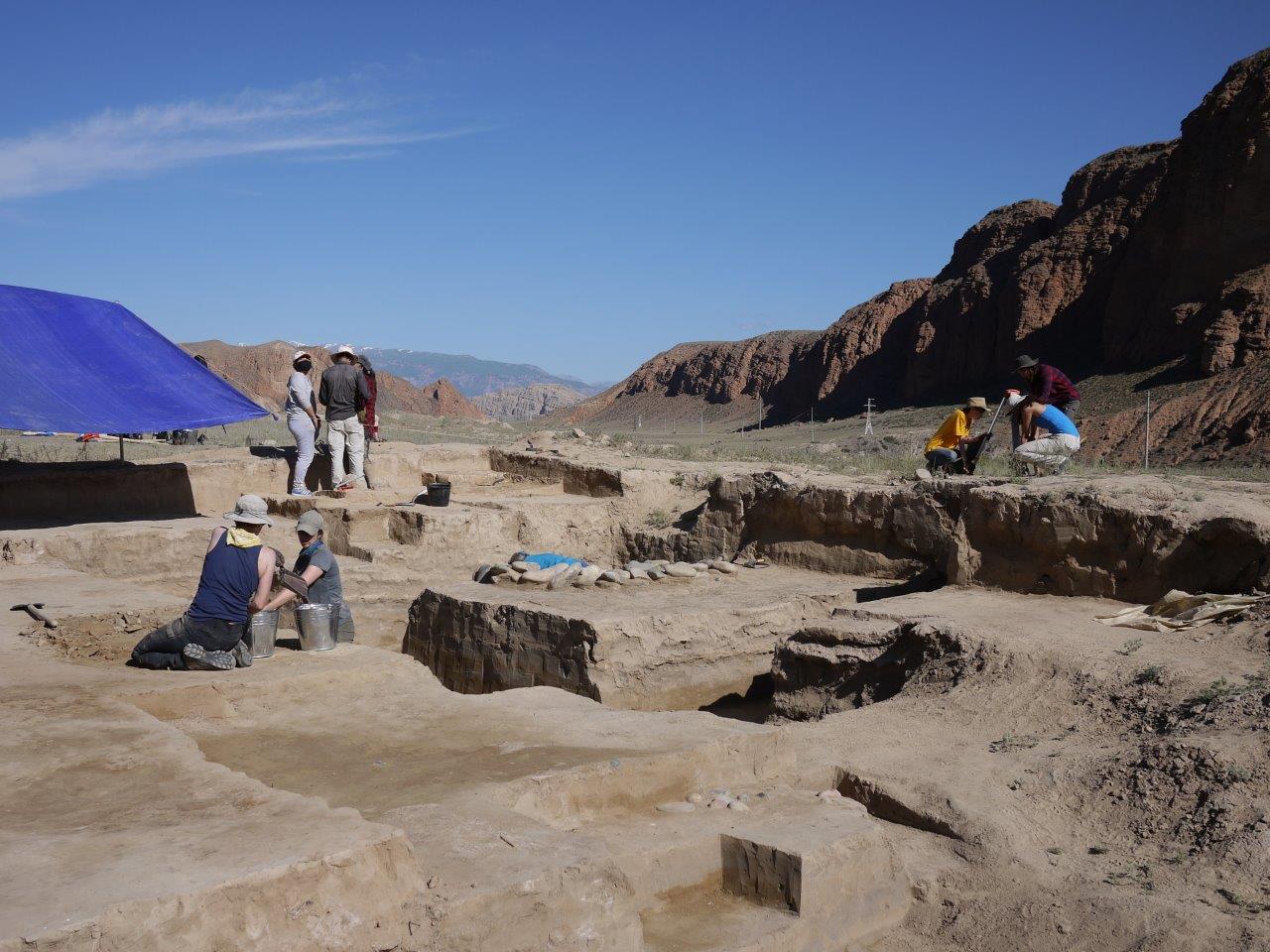 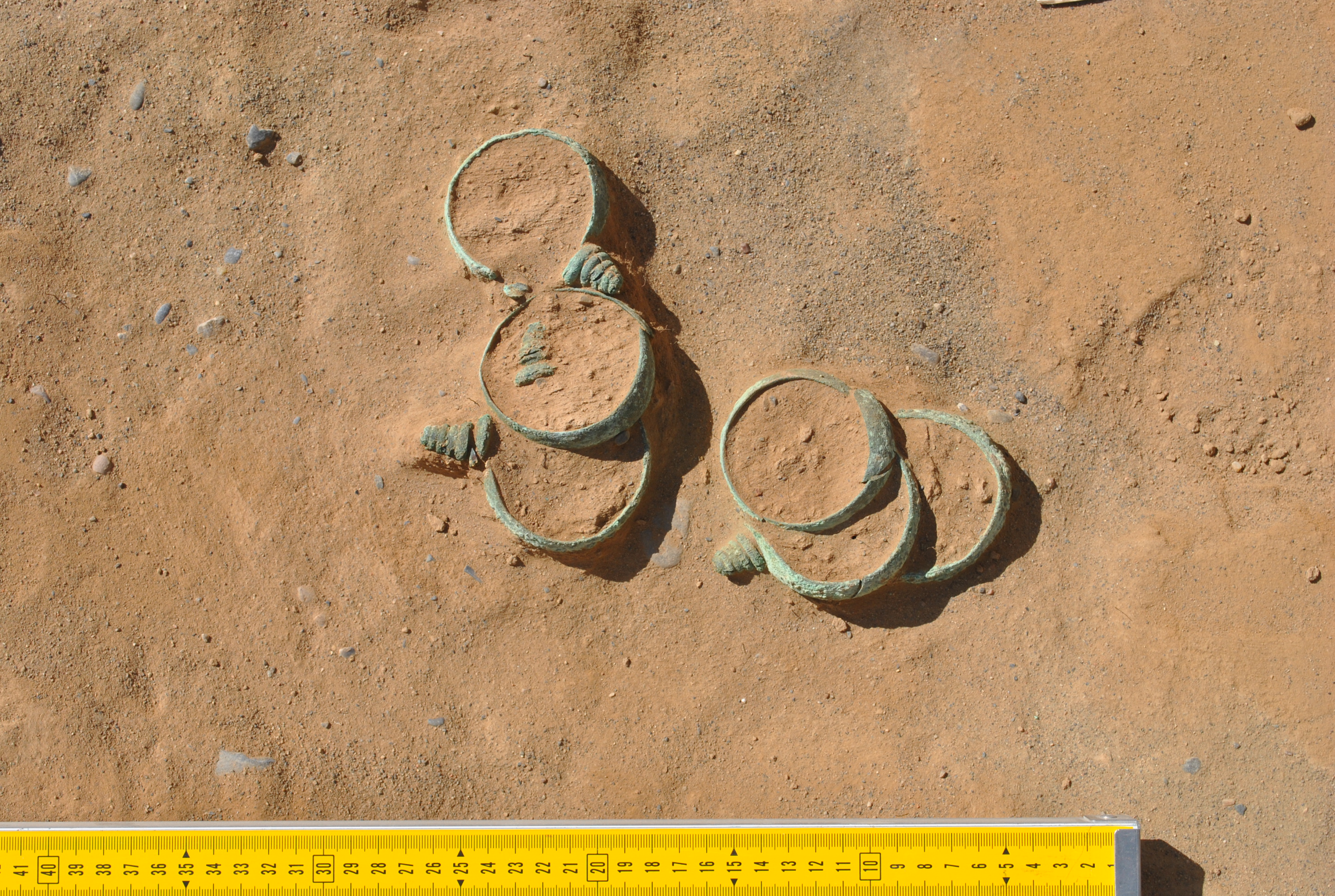 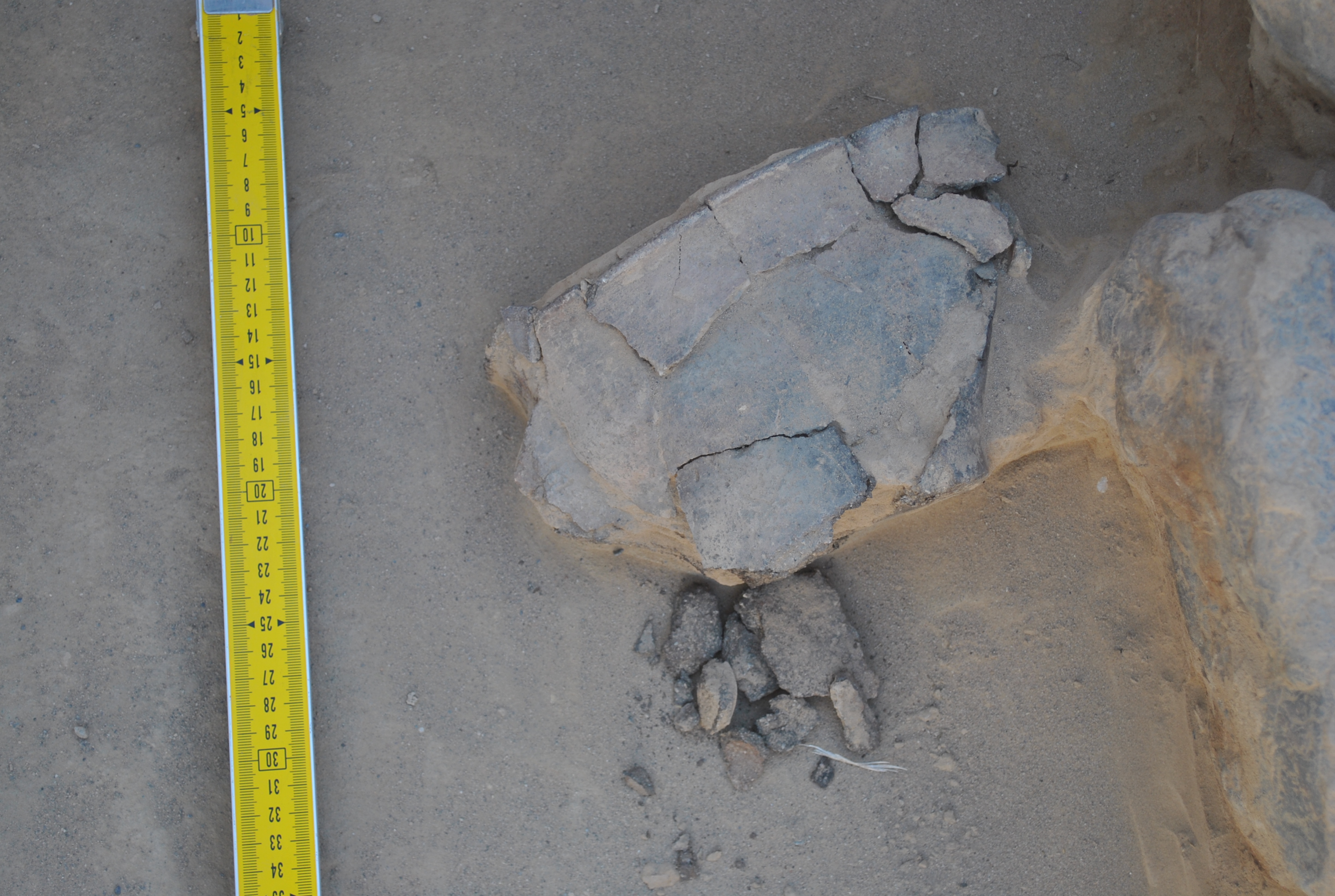 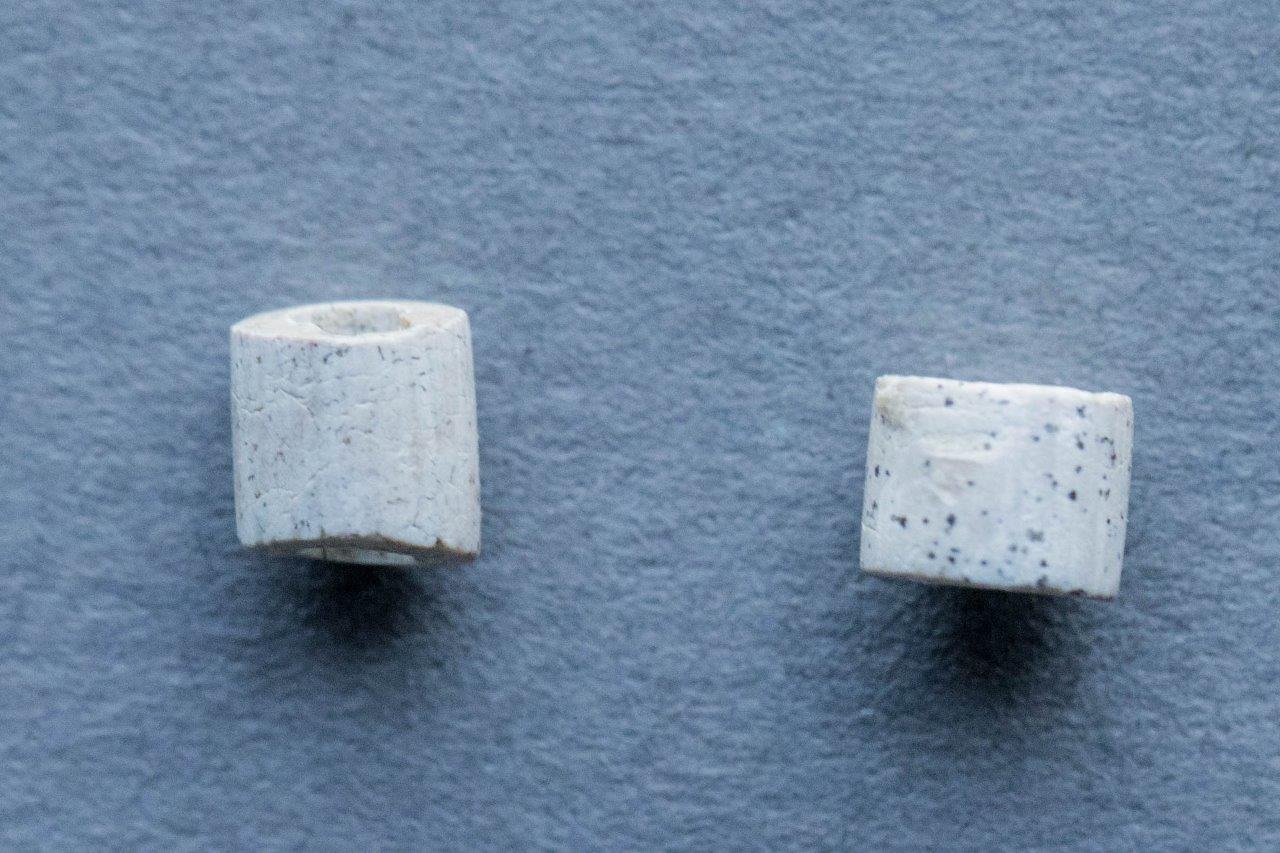 Stone beads from the Bronze Age recovered on the UCA Naryn campus. 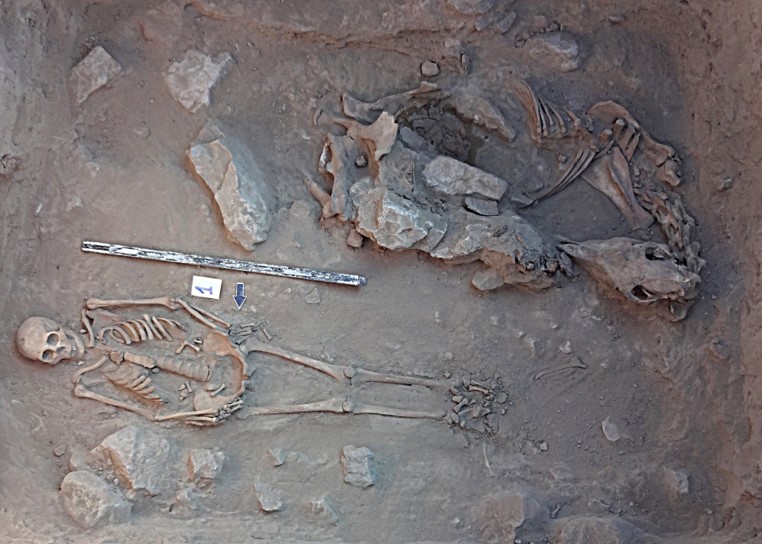