Chairman, Board of Trustees 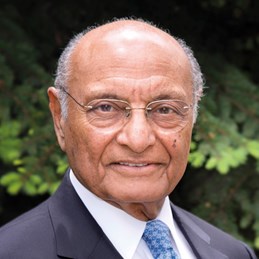 Dr Shamsh Kassim-Lakha is Chairman of the Board of the University of Central Asia (UCA). From June 2014 to September 2018, as Executive Chairman, he was responsible for leading the planning, building, and operation of the campuses and programmes of the University across all three of its Founding States.

Dr Kassim-Lakha’s association with UCA commenced in 1996 when as co-chair of the Commission on the Establishment he led a distinguished panel of international and regional members who conceptualized this University. In 2000, he was involved in the negotiations of the International Treaty which led to UCA's establishment by the governments of Tajikistan, the Kyrgyz Republic and Kazakhstan, and His Highness the Aga Khan.

In addition to his UCA responsibilities, from 2014 to 2022, Dr Kassim-Lakha served as Diplomatic Representative of the Aga Khan Development Network (AKDN) to the Kyrgyz Republic.

As Founding President of the Aga Khan University (AKU), the first private university chartered in South Asia, Dr Kassim-Lakha led for nearly three decades, the planning, building, and operations of this renowned institution established by His Highness the Aga Khan in 1983. During his tenure, the University established its Medical, Nursing and Educational programs in Pakistan, Eastern Africa, and the United Kingdom.

The first two decades of his career were with the Aga Khan Fund for Economic Development, where he served as Managing Director of Industrial Promotion Services of Pakistan, a manufacturing and venture capital company with a workforce of 22,000.

Among his public service, Dr Kassim-Lakha has served as Pakistan’s Minister of Education and as Minister of Science and Technology in the caretaker government in 2007-2008. As Minister of State in 2001-2002, he led the task force which recommended major reforms in Pakistan’s higher education, including structural changes in universities and the creation of the Higher Education Commission. On his retirement from AKU he was appointed a member of the Commission from 2007 to 2011 and serves on it since 2018. He chaired the committee which wrote Pakistan's National Environment Protection Act (1997). From 2000 to 2015, he served as the Founding Chair of the Board of Pakistan Centre for Philanthropy, an institution he helped to conceptualize.

Since 2007, he is Senior Distinguished Fellow at the Munk School of Global Affairs and Public Policy, University of Toronto. From 2007 to 2013, he sat on the Board of the International Baccalaureate Organization. Since 2016, he is a member of the Steering Committee of the Aga Khan Music Awards.

He has written and published on school and higher education, philanthropy, civil society, and management in renowned journals, including The Lancet and Nature and has contributed book chapters on some of these themes. Dr Kassim-Lakha received his undergraduate education from the South Bank and Westminster Universities, in London and completed his graduate studies at the University of Minnesota, USA.