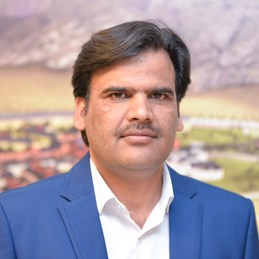 Dr Muhammad Fayaz is an Assistant Professor of Computer Science at UCA’s School of Arts and Sciences. Before joining UCA, he worked as a Visiting Lecturer and Teaching Assistant at the University of Malakand in Chakdara (Pakistan) for two years.

Throughout his academic career, he has published over 40 research papers in the reputed Web of Science and Scopus indexed international journals and conferences. His research interests include combinatorial optimisation problems, machine learning, image processing, Internet of Things (IoT), fuzzy inference systems, and other related areas.

He earned his PhD in Computer Engineering from Jeju National University (JNU) in Jeju, South Korea in 2019. During his studies, he worked at a Mobile Computing Lab at JNU. His responsibilities included preparing project proposals, designing IoT-based smart solutions, the application and implementation of artificial intelligence algorithms, and writing project reports. During his stay in South Korea, he also worked on several projects on the Underground System and the SAR-based Big Data Classification and Analysis of Disaster/Damage type, funded by the Electronics and Telecommunication Research Institute, and Korean Aerospace Research Institute, respectively.