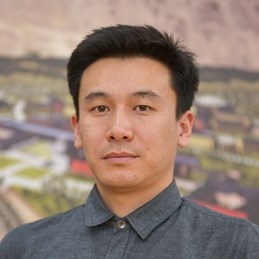 Aibek Baiymbetov is a Research Fellow at the University of Central Asia’s Cultural Heritage and Humanities Unit. He has pursued MA in International Relations and BA in History from the Jusup Balasagyn Kyrgyz National University. Aibek also studied at the University of Tsukuba in Japan as an exchange researcher, and completed education in Guangzhou, China in Chinese language and Eastern cultures.

Aibek Baiymbetov has been working in the field of cultural heritage for more than 10 years, with a focus on preserving intangible cultural heritage, popularising traditional knowledge and practices, as well as creating a network of creative youth in the field of music, theatre, film, and journalism. Aibek is a co-founder of the «Kyrgyz Kairyk» music project for the preservation and popularization of traditional music. He is also a co-founder of the school of Kyrgyz journalism and a youth experimental theater. For the past two years, he has been actively working in the field of documentary films as the director and screenwriter.