Background of The ‘Life in Kyrgyzstan’ Conference

The ‘Life in Kyrgyzstan’ (LiK) Study is a research-based, open access, multi-topic longitudinal survey of households and individuals in Kyrgyzstan. It tracks the same 3,000 households and 8,000 individuals over time in all seven Kyrgyz regions (oblasts) and the two cities of Bishkek and Osh. The data are representative nationally and at the regional level (East, West, North, South). The survey interviews all adult household members about household demographics, assets, expenditure, migration, employment, agricultural markets, shocks, social networks, subjective well-being, and many other topics. Some of these topics are addressed in each wave while other topics are only addressed in selected waves. The survey was conducted in 2010, 2011, 2012, 2013, 2016, and 2019.

The LiK Study received funding from the Volkswagen Foundation for the first three waves (2010-2012) when it was hosted by the German Institute of Economic Research (DIW). In the period 2013-2015, Wave 4 was funded by DFID and IZA as a part of the Growth and Labour Market-Low Income Country (GLM-LIC) Programme. The consortium included the Stockholm International Peace Research Institute (SIPRI) as the lead institution, UCA as the main Kyrgyz partner, and several research institutions from Asia, Europe and North America. Since then, the study has been hosted by the Leibniz Institute of Vegetable and Ornamental Crops (IGZ) for Waves 5 and 6 and has received funding from UN-FAO, IFPRI, DFID, IZA and, internally, from IGZ and UCA.

The ‘Life in Kyrgyzstan’ survey data is publicly available. The data can be used by any interested party for non-for-profit research, policy analysis and teaching purposes.

The data for 2010-2013 and 2016 can be obtained from the International Data Service Center (IDSC) of the Institute for Labor Economics (idsc.iza.org/lik). The survey questionnaires and interviewer manuals can be downloaded on the project website at www.lifeinkyrgyzstan.org.

The LiK Study today is a global knowledge and research infrastructure, with panel dataset made available for public access. This has resulted in the wide use of the LiK Study for academic research. As of July 2022, 31 scientific academic articles using the LiK data were published in international peer-reviewed journals such as Agricultural Finance Review, American Political Science Review, Demography, Demographic Research, Economic Journal, Economics of Transition, Journal of Comparative Economics, Journal of Development Studies, Problems of Post-Communism, Social Science & Medicine, World Bank Research Observer, and World Development. The LiK data are used for research and teaching purposes in 28 countries by 103 academic, research and development institutions. 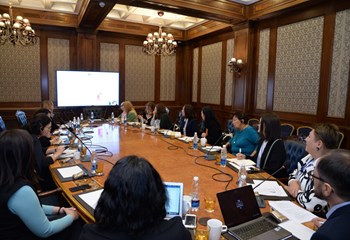